How to play Hearts?

Hearts is a trick-taking game.
Our version is played by four players - You (Turtle) against three computer bots (Swan, Dolphin, and Iguana). 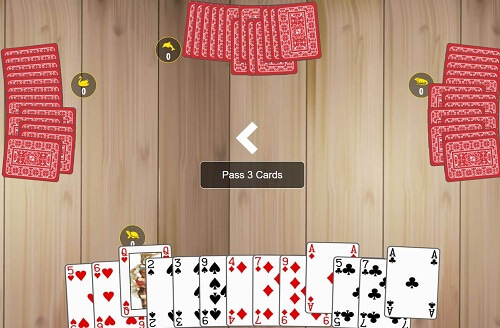 Each turn starts with one player playing one of his cards, this is the leading card of the turn.
Other players must play a card of the same suit.
If a player doesn't have a card of that suit, he is free to play any other card.

After all players played a card, the player who played the highest card of the leading suit takes all Four cards.
If one or more of the four cards carry penalty points (a Heart or the Queen of Spades), they are added to the player's score.
This player will also play first in the next turn.

When a player doesn't have a card of the leading suit, he has a chance to play any unwanted cards, like the Queen of Spades or high Hearts, knowing that he cannot win this turn and take any penalty points.

When the round starts, the player who has the 2 of Clubs is the first to play, and he must play that 2 of Clubs.
You cannot play the Queen of Spades or a Heart on the first turn of the round.

A player may lead with a Heart only after hearts were broken.
Hearts are broken when any player doesn't have a card from the leading suit and played a Heart instead.
A Broken Heart icon will appear on the lower left side (next to your score) once Hearts are broken. 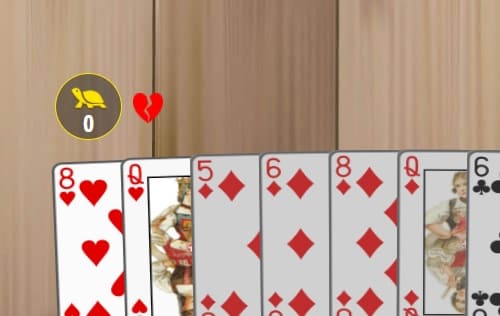 The game ends once one of the players reaches 100 points (you can change this number from the Options menu).
When the game ends, the player with the lowest number of penalty points wins.

Special Rule: if one player gets all 26 penalty points, he will get 0 points, and all other players will get 26 points instead. This is called "Shooting the Moon".

The cards are always dealt in random, regardless of the difficulty level. The levels differ in the algorithm that the computer opponents use.

On the Easy level - The computer will only use the basic game rules and strategy, for example, he will play low and high cards when appropriate but will not try to count cards or plan any complex strategies.

On the Medium level, some more advanced strategies will be used, such as getting rid of cards from a specific suit when that suit has many cards.
The computer opponents will also be more aggressive, trying to force other players to play their spades, trying to expose the Queen of Spades early in the game.
The computer player will also remember which cards he passed to another player and act accordingly.
For example, if he passed the Queen of Spades to another player, and the leading card's suit is Spades, he may play the King or Ace of spades after that player played his turn, knowing it's a safe move.

On the Hard level - the algorithm will also count and remember all played cards and will try to guess who has the Queen of Spades (or any other cards) and play accordingly, he will also be more cautious when trying to void suits or when trying any other strategies.