Catching Them All: Pokémon Across the Nation

Whether it’s trading cards, Game Boys, iPhone games, or movies and TV shows, there are a thousand ways to catch Pokémon in our lives. This Japanese franchise was all the rage in the 90s and has become a pop culture fixture in the U.S. ever since.

But what creatures are most likely to be in each state’s Pokéball?

To find out which Pokémon is each state’s starter, we analyzed over 2,700 words and phrases related toPokémon to determine the most popular “pocket monster” in each state. We also surveyed more than 900 Pokémon players to better understand gaming habits and the long-standing love for the franchise.

Top Pokémon in Each State 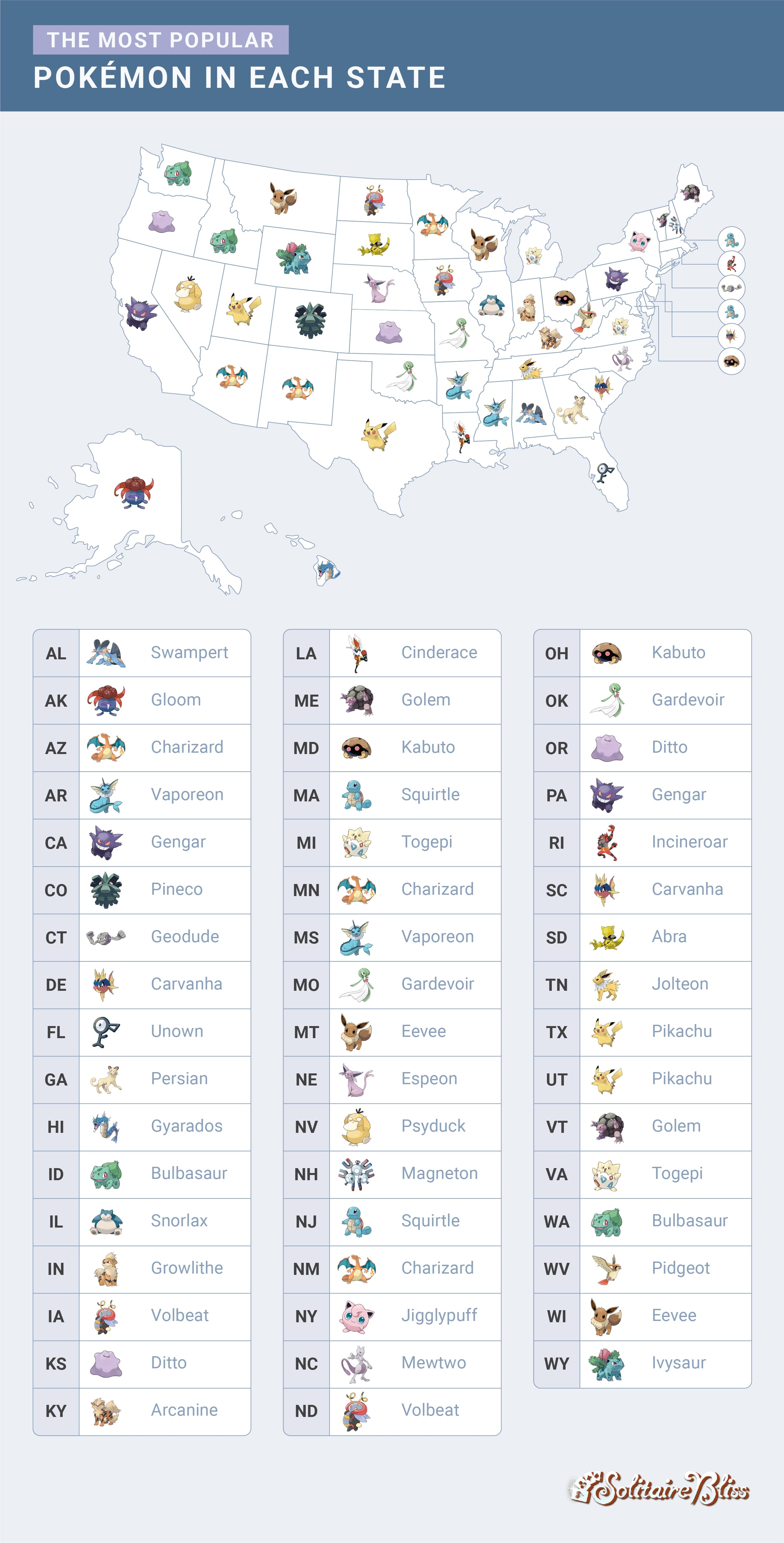 It turns out the U.S. contains multitudes - not just of landscapes, but also Pokémon! While Pikachu, Charizard, and Bulbasaur were predictably popular in several states like Texas, Arizona, and Washington, some states really love some of the less popular Pokémon like Kabuto (Ohio) or Geodude (Connecticut).

Alaska is on the hunt for wild Swamperts, and it seems that Illinois is looking to embrace the Snorlax lifestyle. The island state of Hawaii loves its water Pokémon, as the powerful Gyrados is the most popular Pokémon there.

The United States of Pikachu

Nationally, America is indeed the United States of Pikachu, with the lovable electrical hazard coming in as the #1 most popular. Other strong contenders include the fiery Charizard at #2, fluffy Eeevee at #3, and Gardevoir and Snorlax at #4 and #5 respectively.

Besides Gardevoir, the most popular Pokémon across the nation are some of the most well-known and historic Pokémon. All 9 are part of the original 151 Pokémon, and chances are, even if you’re not a Poké nerd you’ve heard of Pikachu or Charizard. 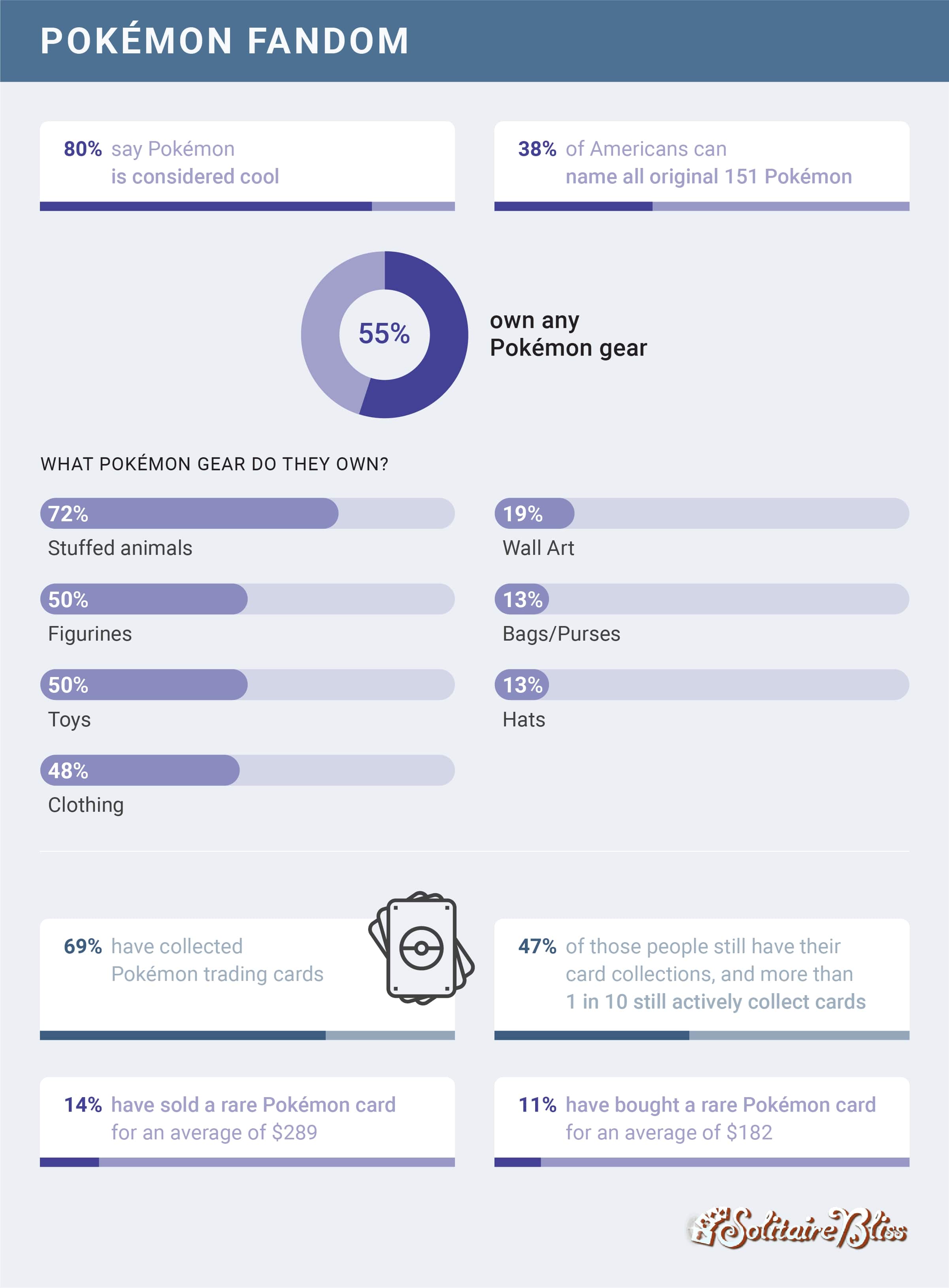 Americans love Pokémon- and they think it’s cool! 4 in 5 think that Pokémon is considered cool, and nearly 2 in 5 Americans have a complete mental Pokedex- they can name ALL 151 original Pokémon! Now that takes training!

We wear our hearts (or Pokémon) on our sleeves, too- just over half of Americans sport Pokémon gear, with stuffed animals, figurines, and toys as the top three types.

What’s in the cards? 69% of Americans have collected the iconic Pokémon trading cards, and nearly half of those still have their card collections - some are even STILL collecting! That might be because it’s lucrative- 14% have sold a rare Pokémon card for an average of $289, and 11% have bought a rare card to the tune of an average of $182.

Pokémon isn’t just a popular collection, it started as a game and has developed into movies, shows, collectibles… and continues to be wildly popular even today. Following the release of Pokémon GO, there was a resurgence in the franchise’s popularity. The game encouraged people to exercise, something that your average board game doesn’t do.

Of the video games, the most played game generation is Generation I (Red, Blue, Yellow) with 62% having played at least one of those games. Generations III and II were the next most played. This makes sense since Blue, Red, Yellow, and Emerald are among the favorite core Pokémon games!

Only 14% play Pokémon GO exclusively, as it turns out that 71% of Americans prefer the core games to Pokémon GO.

Becoming Pokémasters of the Future 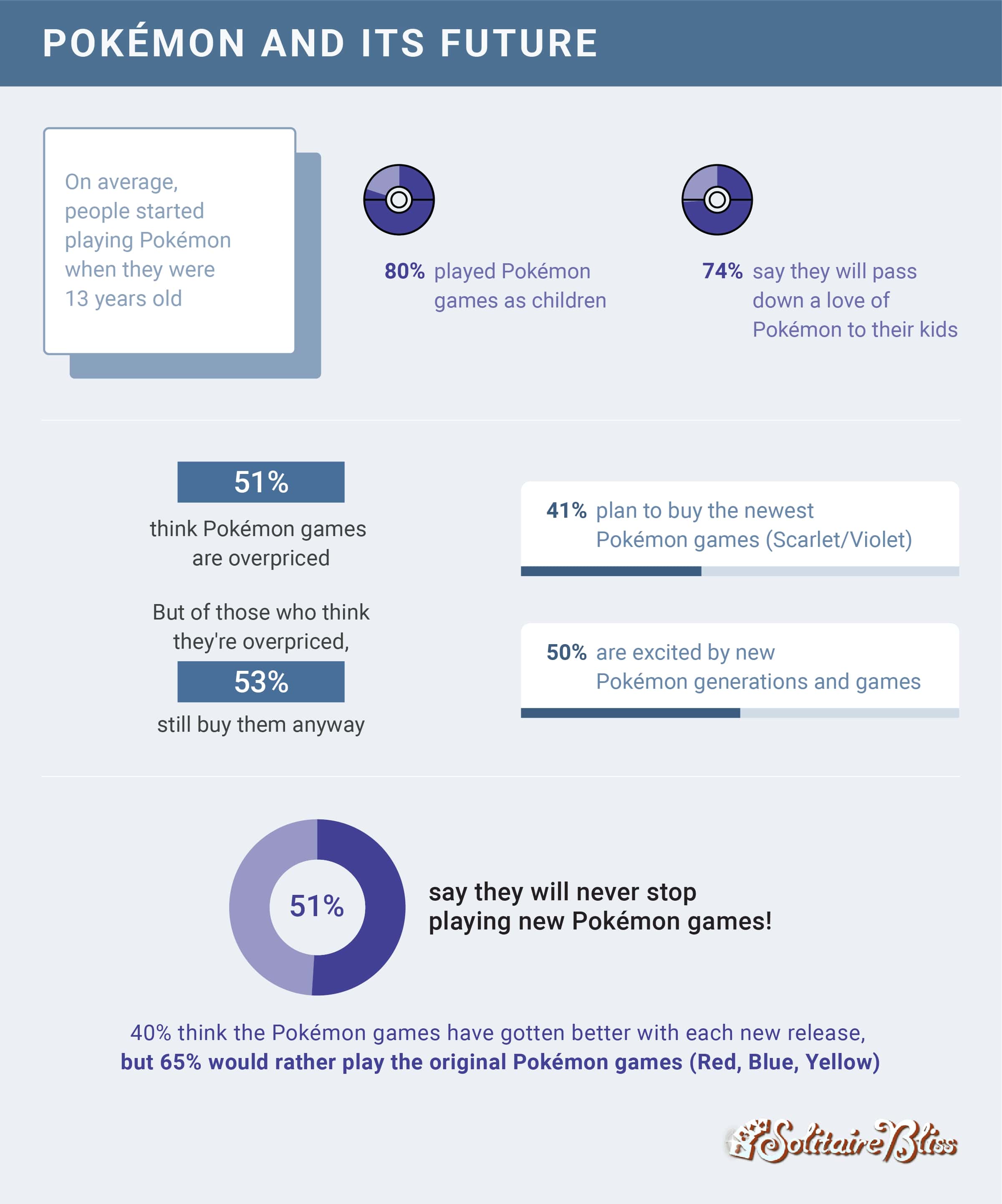 What’s the future of Pokémon in the U.S.? Most people started playing Pokémon when they were 13; 80% of Americans played as children, and 74% said they will pass their love of Pokémon on to their kids.

It’s a bonding point, and one with longevity: despite the 51% of Americans that feel that the Pokémon games are overpriced. Over half (53%) will still buy them anyway. Not only that, but 1 in 2 Americans are excited by the new Pokémon games and generations, and 41% plan to buy the newest games (Scarlet and Violet).

Over half of Pokémon players (51%) claim they will NEVER STOP trying to catch them all!

That said, there might be more than a bit of nostalgia at play: while 40% think the games have gotten better with each new release, 65% would rather play what they know: the original Pokémon games of Red, Yellow, and Blue.

No matter what game you like to play, whether it be Solitaire or something else, it’s clear: the U.S. won’t stop saying “I choose YOU” to Pokémon any time soon.

In September 2022, we also surveyed 980 Americans who play or have played Pokémon to get their feedback on the franchise and their game-playing habits. Respondents were 44% female, 49% male, and 7% non-binary or non-conforming, with an age range of 18 to 73 and an average age of 31 years old.

When using this data and research, please attribute by linking to this study and citing SolitaireBliss.com