Most Popular Board Game in Each State

Board games (and their online counterparts) have had a comeback over the past two years. With the popularity of Netflix’s show The Queen’s Gambit, and most of us being stuck at home due to COVID-19 restrictions, many Americans have turned to classic and online games like Solitaire for entertainment.

But is there one board game that reigns supreme? We wanted to know which board games are the most popular in the United States in 2022. We analyzed nearly 10,000 Google search terms over the past two years and surveyed over 1,000 Americans to find out about their favorite board games.

For the purpose of this study, we only looked at traditional “board games,” card games (such as Hearts) were not included in our analysis. Games such as Apples to Apples or Cards Against Humanity were also not part of this analysis.

What is the most popular board game in each state? 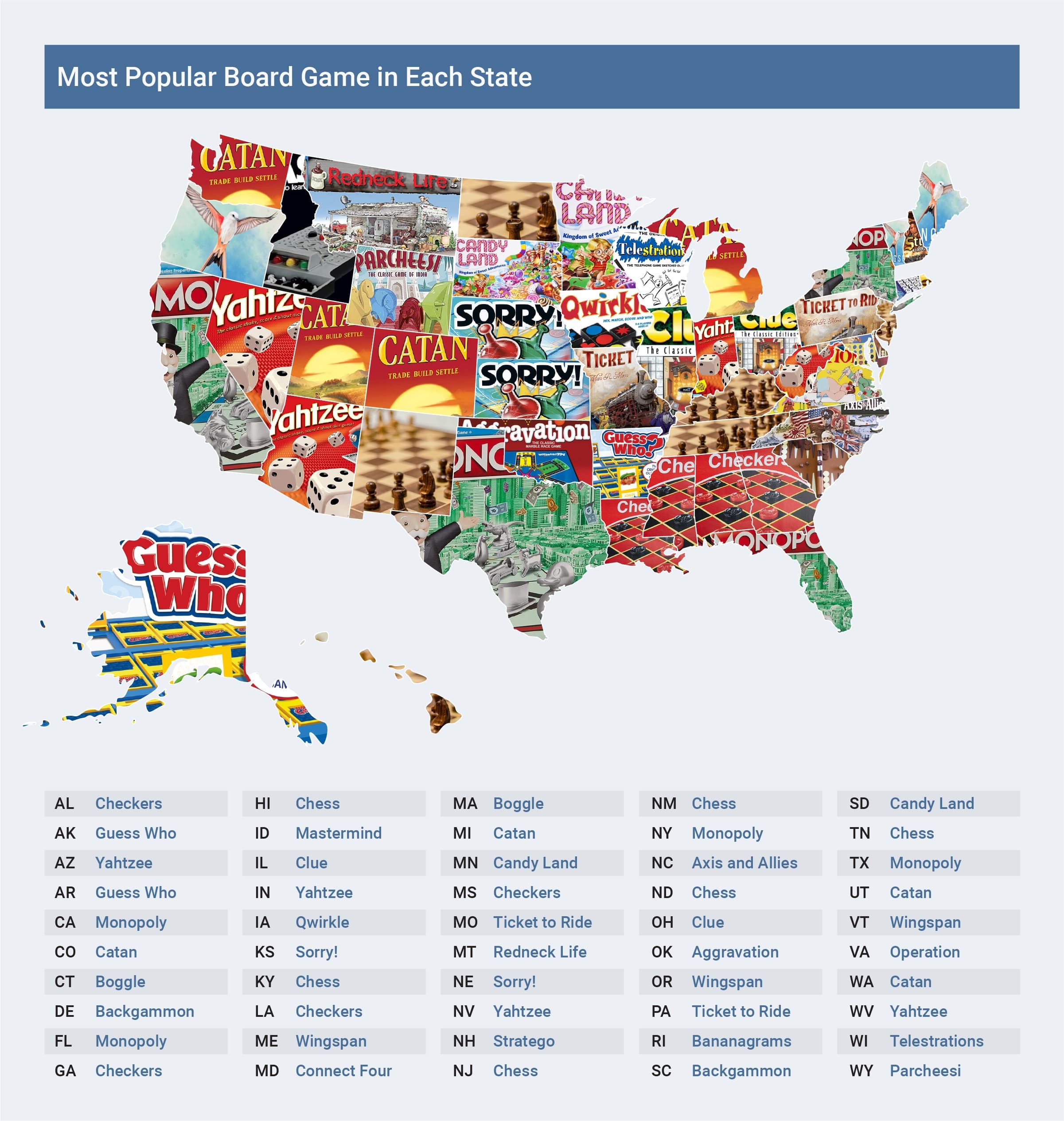 There’s a lot of variety across the U.S. when it comes to every state’s favorite board game. From Monopoly to Clue to Yahtzee to Ticket to Ride, Americans clearly love a diverse range of games.

Checkers was the top choice in the South, coming in first place in Louisiana, Mississippi, Alabama, and Georgia. Maybe that’s because it’s a popular pastime while waiting for a table at Cracker Barrel?

Monopoly came in first place in California, New York, Florida, and Texas. All of these states have some of the largest populations (and most competitive real estate markets) in the country… so it makes sense that Monopoly is their favorite because it’s the only time they can afford to buy a house.

Hawaii, Kentucky (where The Queen’s Gambit was set), New Jersey, North Dakota, New Mexico, and Tennessee are still riding the high of the Netflix show with chess coming in first place across all of these states. Checkmate!

Most Popular Board Games in Major Cities 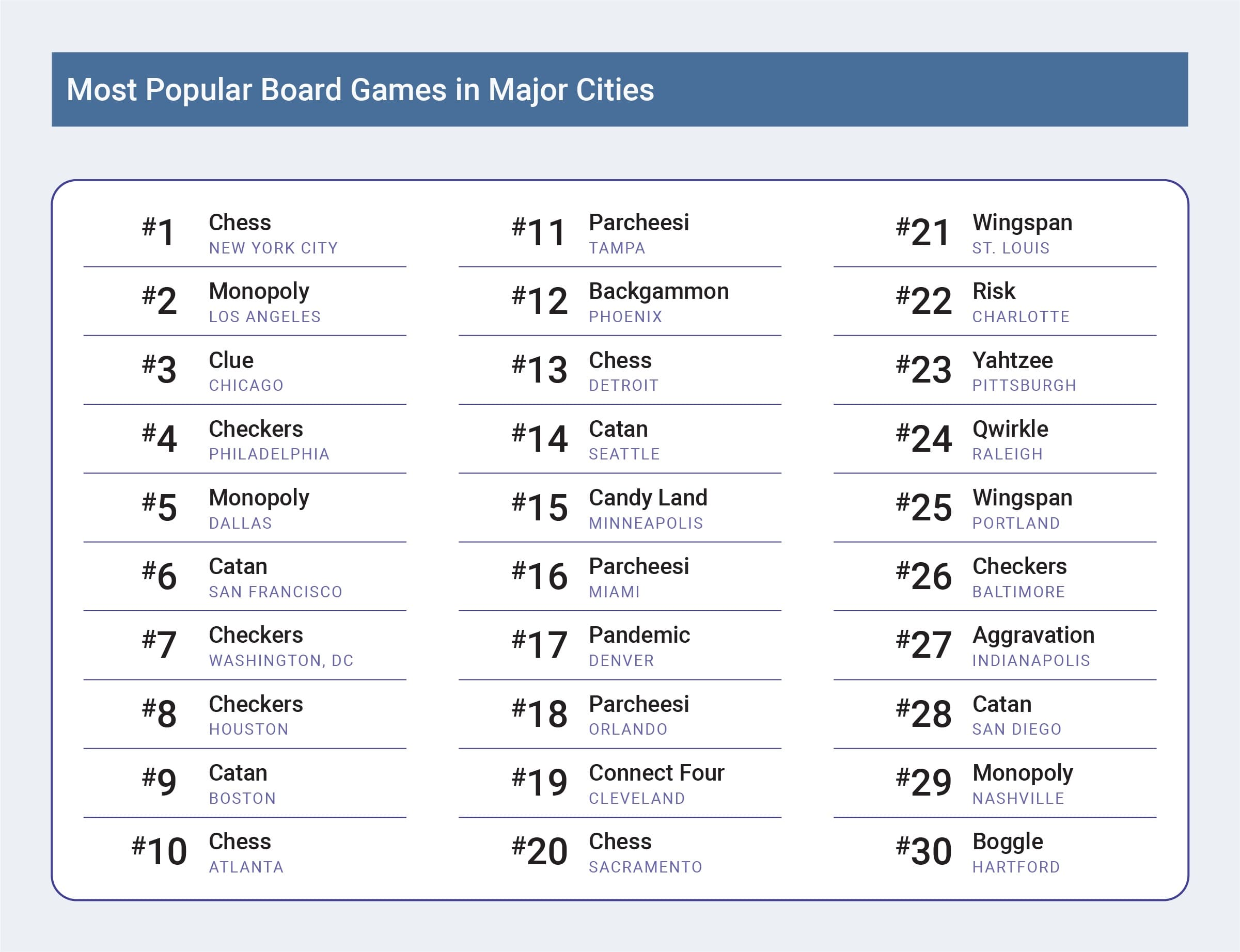 We also wanted to find the most popular board game in every major city in the U.S. It seems that New York City has hung on to the popularity of The Queen’s Gambit, with chess being the most popular game there, as well as in Atlanta, Detroit, and Sacramento.

We all know Monopoly tends to cause family rifts like no other. If you live in Los Angeles, Dallas, or Nashville, beware–it’s the top board game in those cities.

If you want to host a game night soon, you may want to stock up on drinks first. It seems most Americans enjoy pairing their board games with alcohol, with 55% saying they drink while playing, and 46% saying it enhances the experience.

Board Games and the Internet 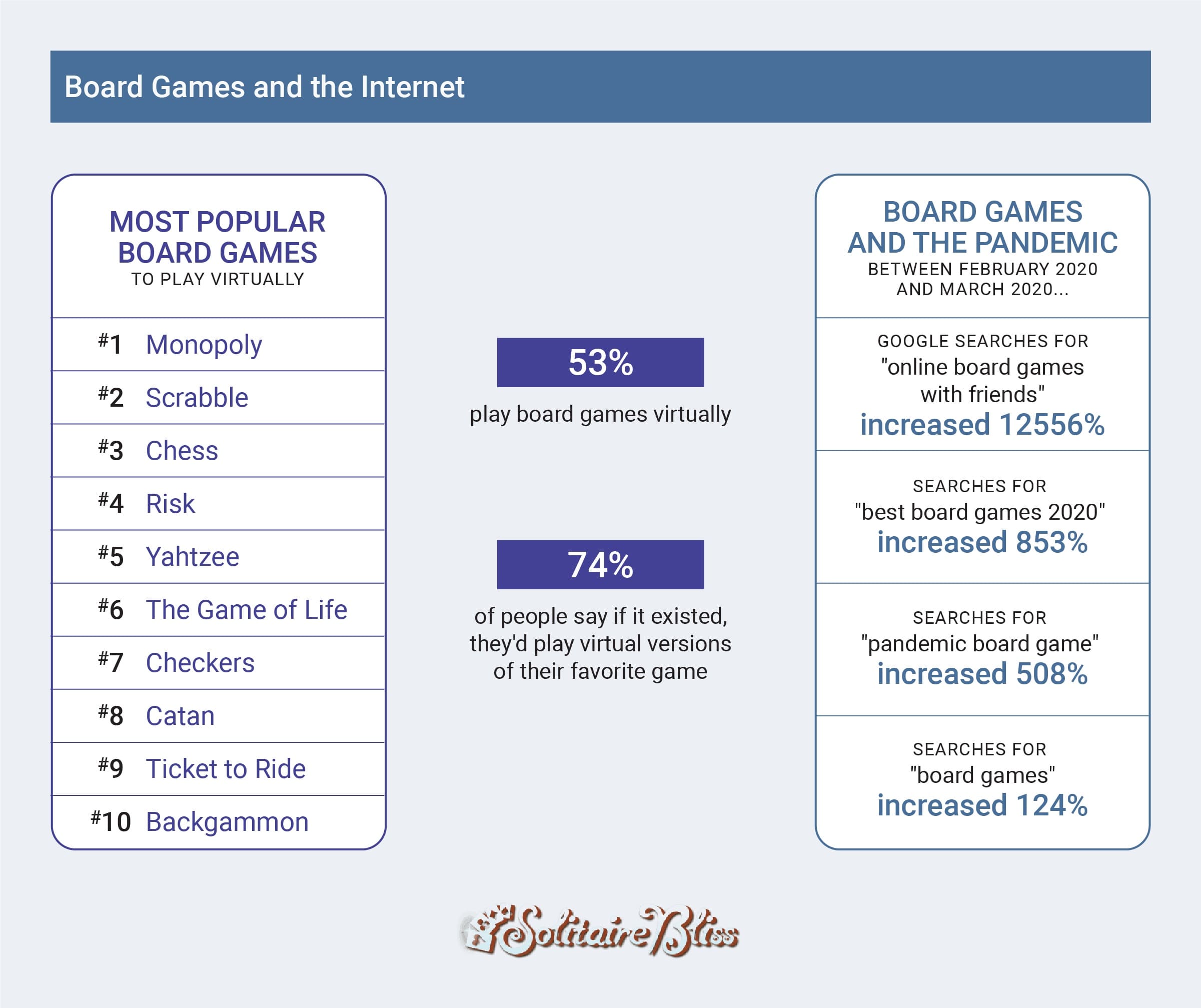 The pandemic caused a revitalization in board game popularity, with searches for online board games with friends increasing 12556% between February and March 2020. Other similar searches also experienced unexpected increases, including “best board games 2020” which increased by 853%, “pandemic board game” increased by 508%, and “board games” went up 124%.

Over half (53%) say they play board games virtually, and 74% say if it existed, they’d play virtual versions of their favorite games if they could.

The top board games to play virtually, in order of popularity, are Monopoly, Scrabble, Chess, Risk, and Yahtzee, followed by The Game of Life, Checkers, Catan, Ticket to Ride, and Backgammon.

If you’re looking for something to do this weekend, or want to get into a new hobby, board games (and their virtual counterparts) may be exactly what you’re looking for. Even though we aren’t in lockdown anymore, it seems that the pandemic caused a resurgence in board games that has stuck ever since.

We analyzed about 10,000 Google search terms related to board games and playing board games to complete this study. For state-level data, we looked at search volume per capita averages over the past 24 months.

In March 2022, we also surveyed 1,066 Americans who enjoy board games to better understand their preferences and playing habits. Respondents were 48% female and 49% male, with an age range of 18 to 82 and an average age of 37 years old.

When using this data and research, please attribute by linking to this study and citing https://www.solitairebliss.com/