How to Play Solitaire: Rules and Strategies for Beginners 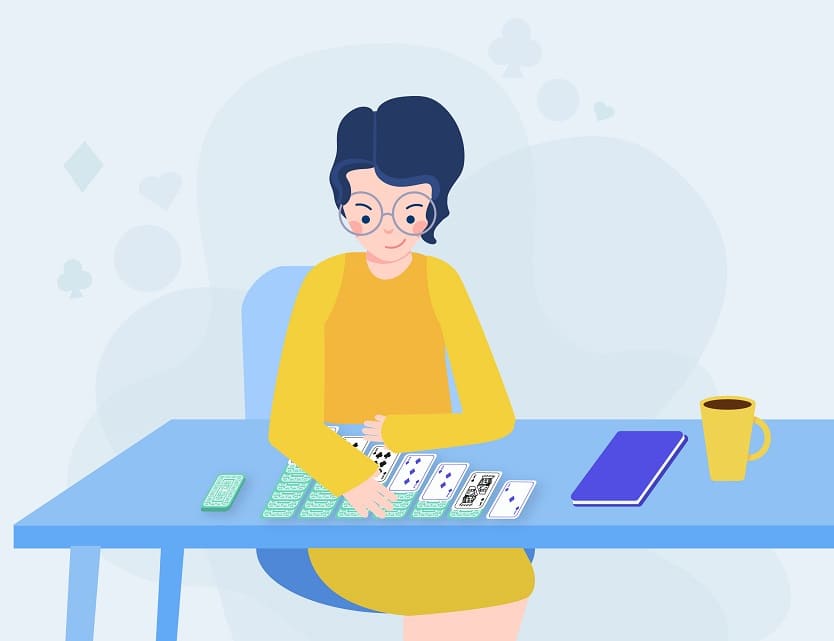 When you need a single-player card game, Solitaire, which is also known as patience or cabale, offers an enjoyable challenge. While you can play multiple variations of solitaire, this post focuses on the most popular version:Klondike Solitaire, which is what most people recognize as Classic Solitaire. Also known as Canfield, Klondike first became popular in the late–19th century and is named after the Klondike Gold Rush of the late 1800s in Canada. Hoyle's Games first described this card game in its 1907 edition of.

The object of Klondike Solitaire is to use a series of columns to build the foundation piles of cards, starting with the ace and ending with the king for each suit. Once you have done that for all four suits, you have won the game. 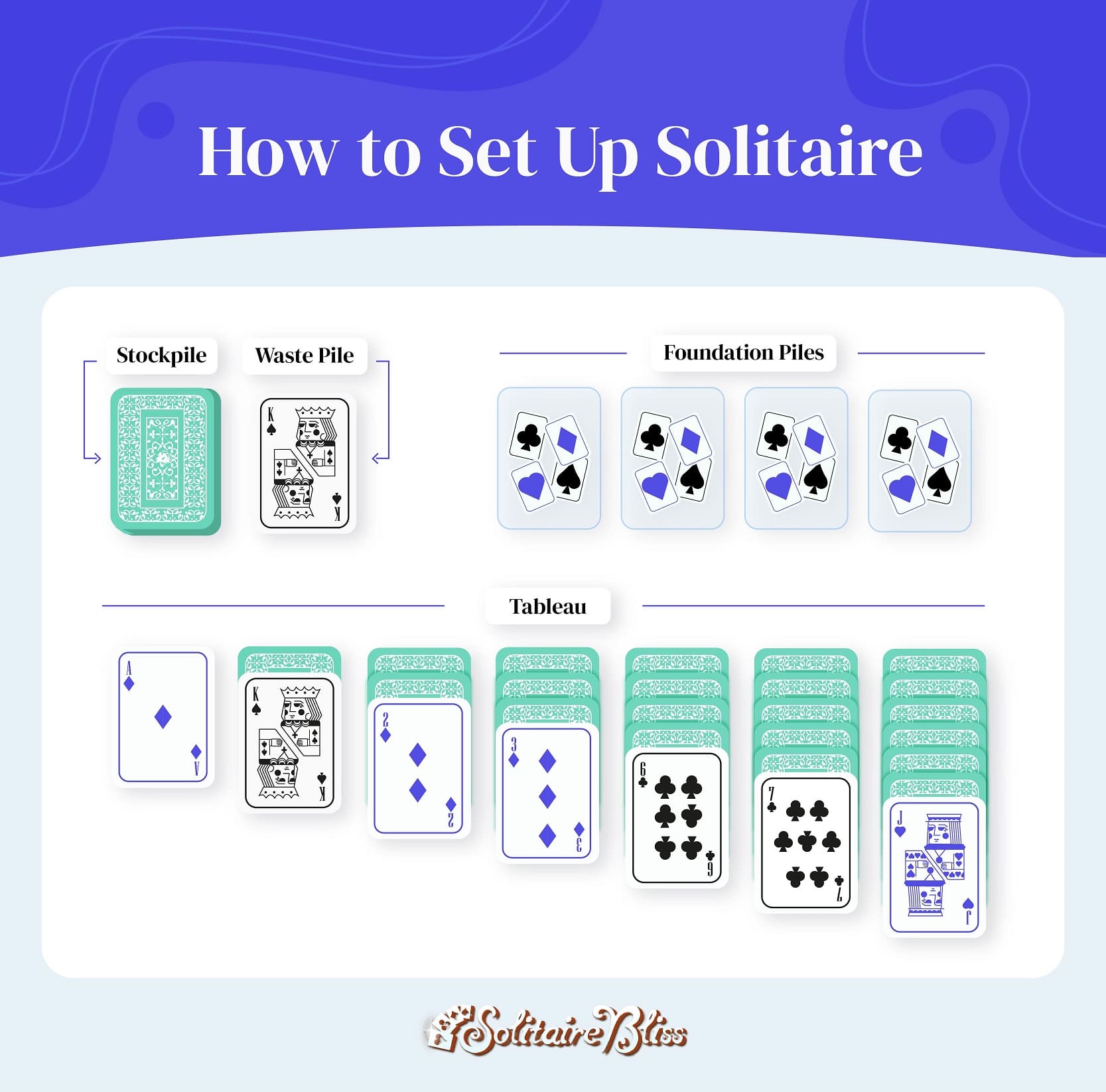 You deal out four types of piles in Solitaire: the tableau, the foundations, the stock, and the talon.

Put the undealt cards into the Stock. You will draw from this pile of cards throughout the game. Typically, you place this pile above the first card of the tableau—the one you dealt face up that has no hidden cards beneath it.

You won’t have anything in the waste pile while you’re dealing, but you soon will. So leave room next to the stockpile to place unused cards—cards that you draw from the stockpile but cannot play on the tableau or on the foundation piles. Always lay these unused cards face up in the talon, or waste pile.

4. Leave room for the foundation piles

You also need to leave space for the four foundation piles, which is where you will build the foundations for each suit as you progress through the game. You place the ace for each suit in each pile, followed by the 2, and so on until you get to the king.

You’ll be up and playing in no time since Solitaire's rules are relatively simple and straightforward. Follow this basic description for the rules and the general process for playing a game.

1. Survey the tableau and decide your first move

You can only move face-up cards. Aces can be put in the foundation piles. Cards can be moved between columns as long as they are alternating color and descending order. You may have several moves, and you want to rearrange as many face-up cards as you can to reveal face-down cards in the columns.

You can build up stacks of cards on the tableau so that you can keep revealing new cards. However, all cards exposed face up must be stacked in descending order and with alternating colors of suits. So if you had a queen of hearts exposed on your tableau, you could stack a jack of spades on top of it, and a 10 of diamonds on top of the jack, and so on. Suit doesn’t matter, only color and descending order does. With that queen of hearts, you simply need the next lower card (a jack) and the opposite color (black), which is spades or clubs.

You can move cards individually or entire columns at one time. If you see a face-up king of spades, take the whole column you just built (queen of hearts, jack of spades, and 10 of diamonds) and place it onto the king. Now your column still descends and alternates by color.

If you move a face-up card or group of cards to another column, check to see if you have exposed a face-down card. Anytime your move exposes a face-down card on the tableau, you can turn that single card over, making it face-up on that tableau pile. Now you have a new face-up card to play.

Remember: Make productive moves. Don’t move cards to simply make a move unless it helps you get more cards onto your foundation piles or allows you to reveal hidden cards—or make progress toward revealing hidden cards.

If you don’t have any moves on the tableau—meaning you can’t move anything to the foundation piles or you have no productive moves to make—you can draw from the stockpile and waste pile.

At this point, you have two ways to play:

If you have removed all of the cards from a tableau column, leaving an empty space, you can start a new column with a king. You can place a single king or move an entire column of cards that begins with a king into the empty space. When you empty a column in the tableau, you get a new place to stack cards, allowing you to expose the other face-down cards throughout the tableau and further build your foundation piles.

Can you win every Solitaire game?

While there is sometimes luck involved when it comes to winning a game of Solitaire, they are  more winnable than most people think. Although sometimes cards are dealt in such a way to make it impossible to win, one study found that between 82% and 91% of Klondike Solitaire games are winnable. You can improve your odds by learning some strategies to win Solitaire consistently. 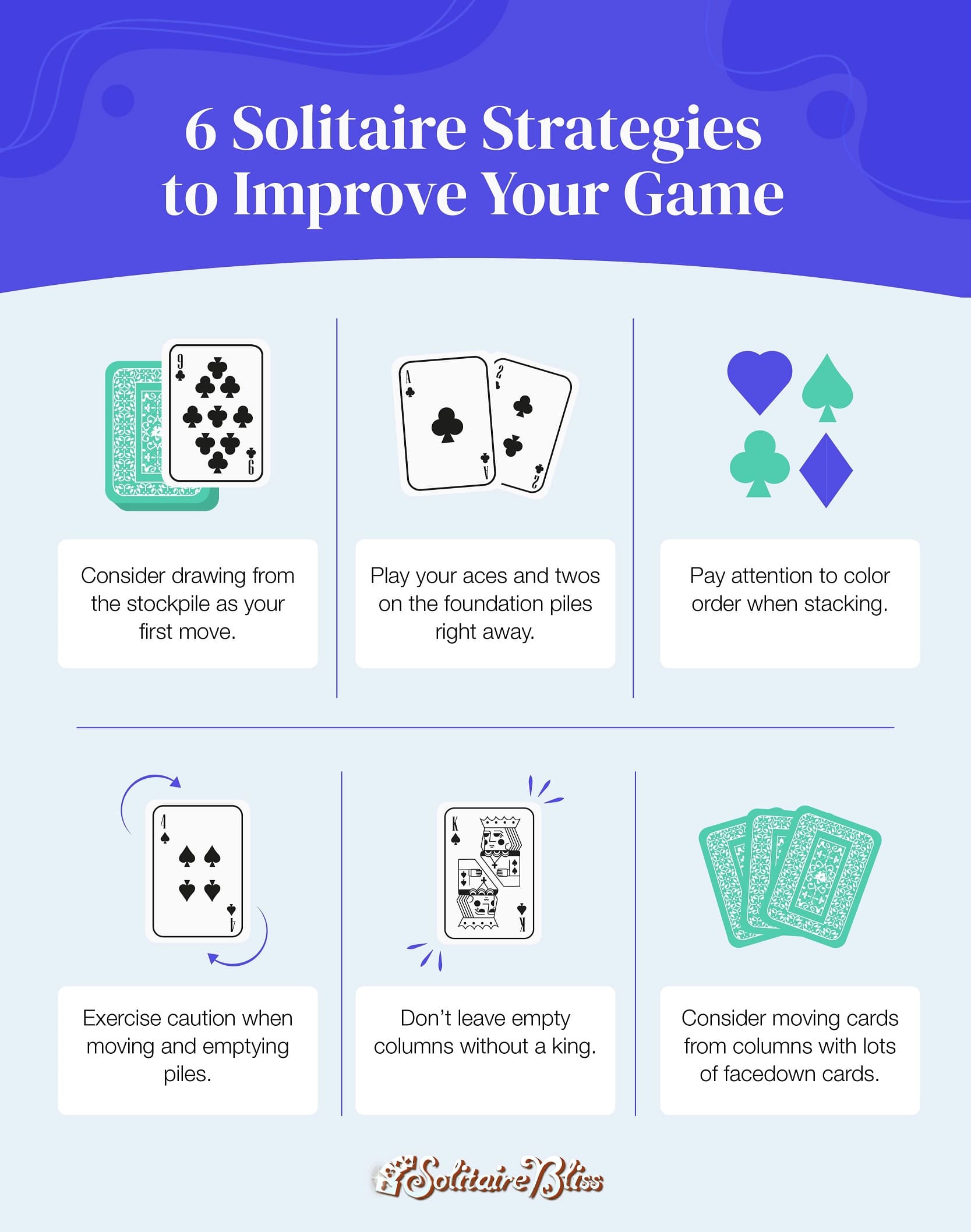 You can try many approaches to playing solitaire, but we highlight a few of the most common strategies in this list:

This guide deals with Klondike Solitaire, but you can also play many Solitaire variations. Try these other types of Solitaire games if you want to switch things up:

Ready to get started playing solitaire? It’s easy: All you need is a standard deck of cards (52 in total) and a basic understanding of how to play the game. Just shuffle up and deal out the tableau as described above, and start building those foundations! Play Solitaire today.