The Best Free Solitaire Apps For iPhone and Android 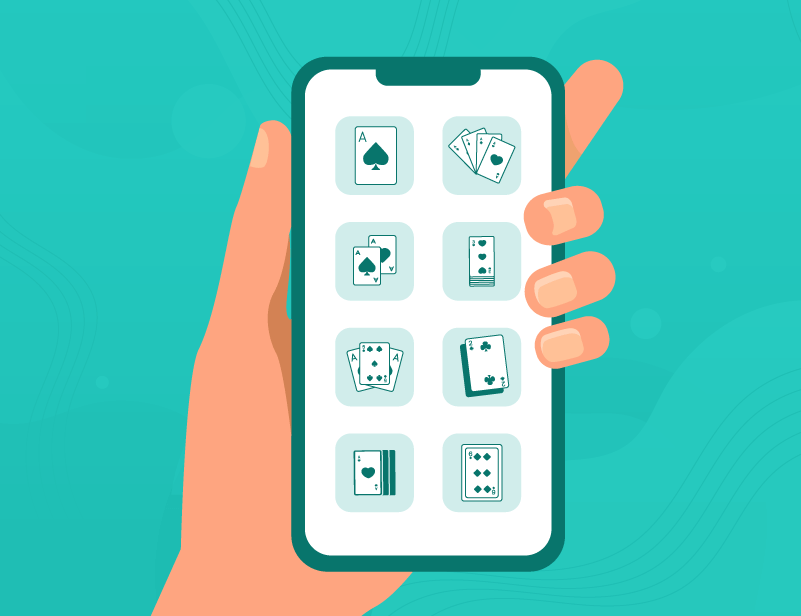 Playing solitaire is a great way to pass the time, but what do you do if you don’t have a deck of playing cards or enough space to play? You use smartphones, an iPad, or a computer, of course. And the best part: You don’t have to set up a Solitaire game yourself! The app does it for you.

Whether you’re looking for a new app that provides the same Solitaire experience you get with physical cards or just want to play a specific Solitaire game, like Yukon, Forty Thieves, or Canfield, we have you covered.

In this guide, we show you the best Solitaire card games available on iOS and Android, and each of them are categorized by versions of Solitaire.

You can find a lot of apps for Solitaire, and sifting through them all to find the best one can take longer than dealing out a new game of Solitaire. So we’ve done the heavy lifting for you and have chosen six of the best free Solitaire games for each of the categories above.

Solitaire not only helps you pass the time but also challenges you in a number of ways as you come up with creative strategies to get all your cards from the stockpile to the foundation pile. Graphically beautiful and heavily customizable, Solitaire is free to play and accessible on a variety of mobile devices, computers, and operating systems. You can even play it on Xbox. 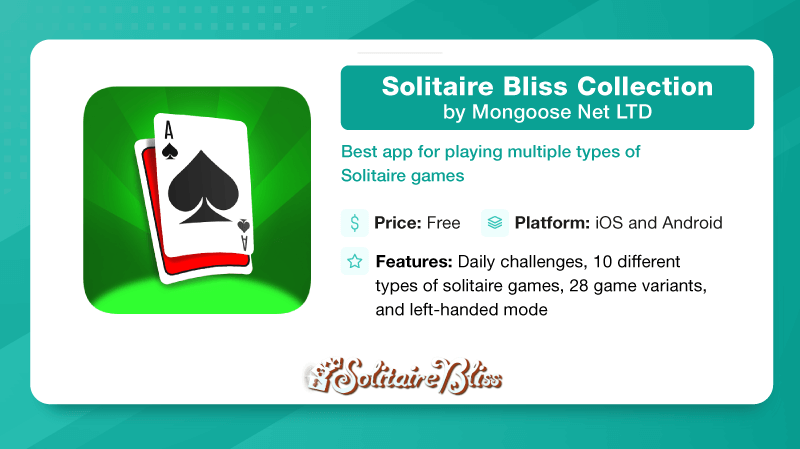 Designed by Mongoose Net Ltd., the Solitaire Bliss Collection is perfect for people who aren’t satisfied with just one type of Solitaire game and want to switch up game types without switching apps. You'll be able to play 28 Solitaire game variants in 10 game types, from Klondike Solitaire to Spider to Freecell to Golf. You can even choose between classic as well as Vegas scoring to give your games even more variety. With this lineup of games, you'll never run out of things to do or customization options on this app. 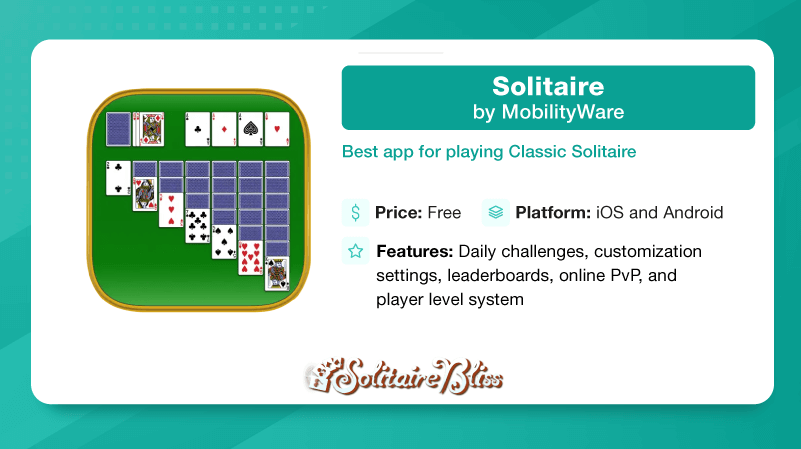 This Classic Solitaire app from MobilityWare is available for both mobile and computer uses. This classic Solitaire card game boasts 1.5 million ratings and has been in the app store for more than 10 years. As one of the best free Solitaire card games out there, it’s ideal for people who are only interested in the most popular solitaire game, Classic Klondike. So if you’re someone who likes to play a variety of Solitaire games on one app, this one might not be for you. 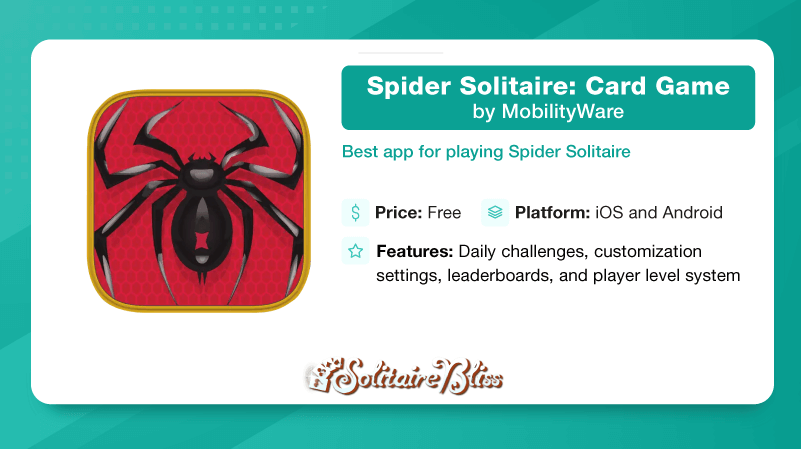 MobilityWare also produces a Spider Solitaire app, which has more than 630,000 ratings. This free app has an easy-to-use interface, and you can progress through new levels and earn titles based on your accomplishments. There are also daily challenges and themes for each month to keep the gameplay feeling fresh. However, this app is devoted to Spider Solitaire. So if you don’t want to switch between apps to get a variety of games, this app may not be for you. 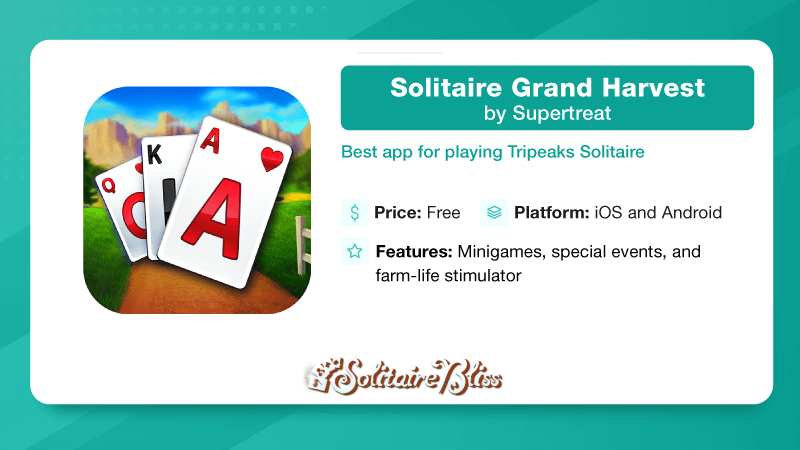 Designed by Supertreat, this highly rated app had 190,000 ratings in the Apple app store and another 1.27 million on the Google Play store. Grand Harvest is free, and it is geared toward those who play only Tripeaks Solitaire. It offers thousands of levels, eye-popping graphics, and even a storyline to keep you interested in the game. 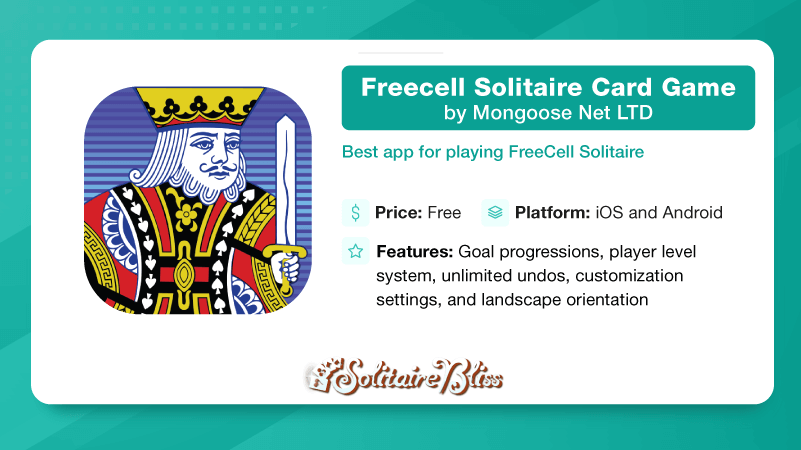 This app has more than 367,000 ratings and is one of the most popular ways to play FreeCell Solitaire on an app. For newcomers, the game features a tutorial so you can learn the ropes and unlimited undo attempts. It offers goal progressions and opportunities to set and beat personal scores. You'll get new goals each day so that the gameplay never gets stale. Although this app focuses on one type of Solitaire, this app comes with features that can make FreeCell more engaging and playable, especially for newbies. 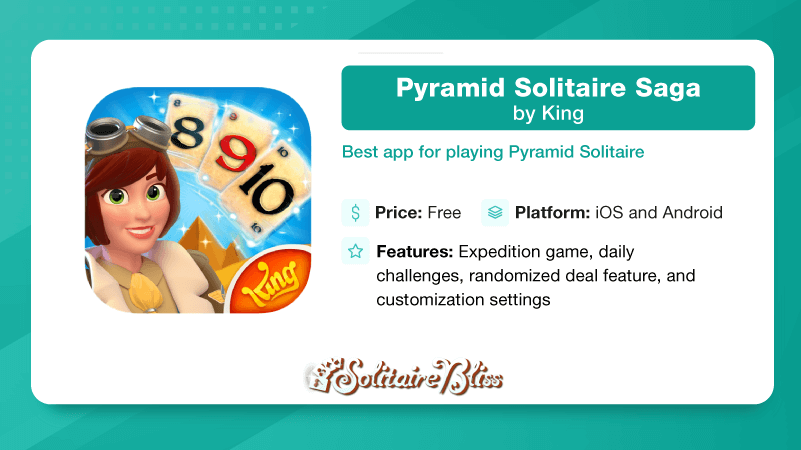 King’s Pyramid Solitaire Saga app boasts more than 312,000 ratings. It’s geared toward fans of the Pyramid Solitaire gameplay, and it offers a simple-to-use interface. The graphics and animations in the game are next level, with a treasure-hunting theme that will keep you interested. And even though it's obviously not a multiplayer game, you can play with friends (or at least compete for high scores).

As you can see, you don’t need a deck of cards or a big table to pick up Solitaire, online or offline. There are tons of free solitaire game apps (although you may have to pay for ad-free or in-app purchases) that make starting a Solitaire game incredibly easy and fun. Whether you’re looking for something to do or want a new challenge, check out our website for Solitaire tips and tricks. We provide hundreds of card games and activities you can play on your own or with friends and family!