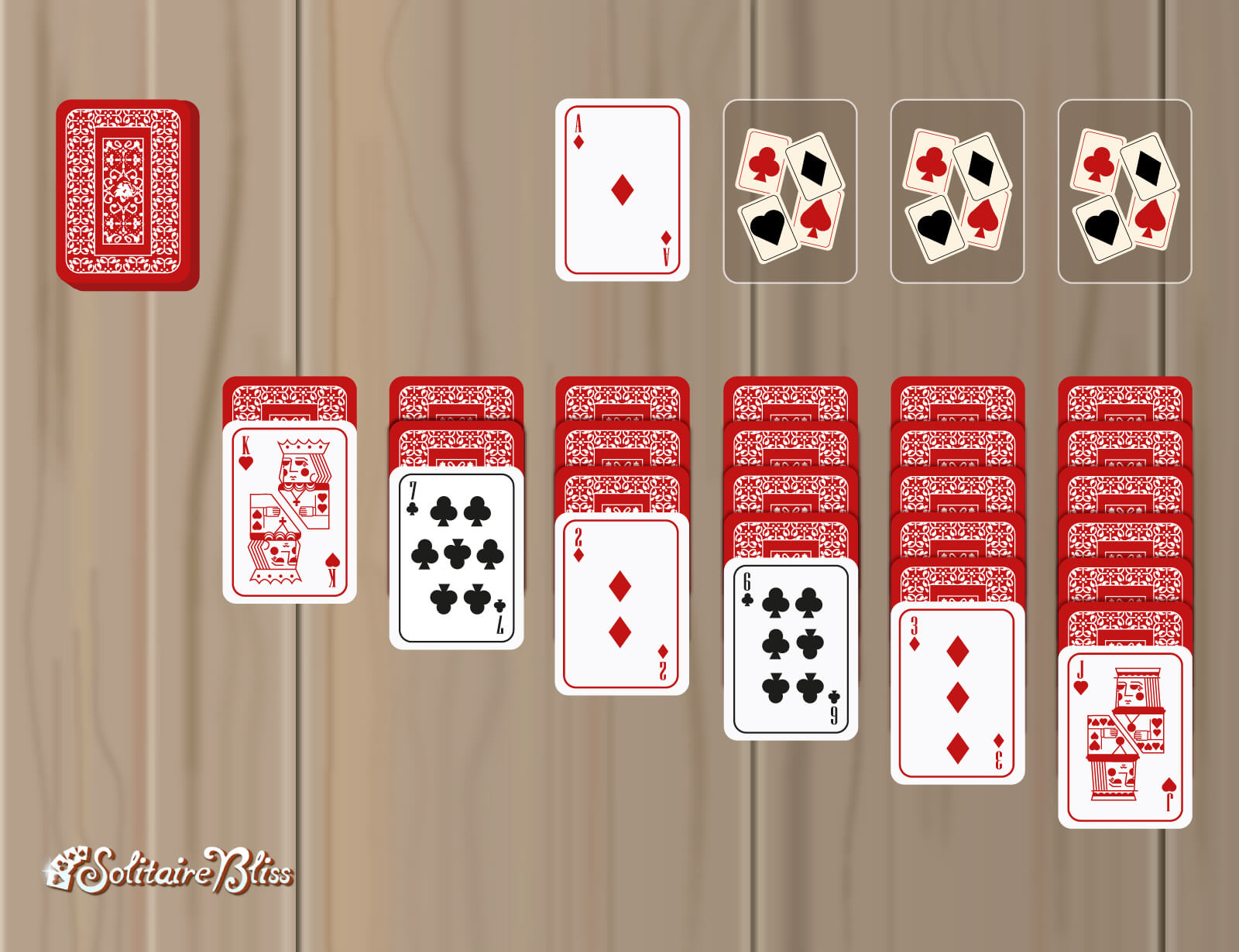 Classic Solitaire, also known as Klondike Solitaire, is a type of card game with the goal of arranging cards in a systematic order. This single-player game, called Patience in Europe, doesn't just beat boredom. You can increase the fun and challenge of the game even more when you employ strategies that help you win.

As with any card game, you have to play the hand you're dealt — but if you use specific strategies in your Solitaire game, you play better and increase your chances of success. In this guide, we go over the best moves to make when playing Solitaire to help you win your next game.

Moving cards that appear on the table, or tableau, should be your first move in Solitaire. Doing this before you touch the stockpile allows you to create options, such as making foundation piles, opening up columns for kings, and uncovering as many cards as possible — the more cards you have uncovered, the more options you have to play. With a clearer picture of what you have available, you can make decisive moves that open up even more columns or uncover more cards.

For example, if you have an ace in the first pile of your tableau and a king in another tableau column, you can start the game by moving the ace to the foundation pile and the king to the first empty tableau column.

If you have no aces showing and your face-up cards are numeral cards, you can still make good use of your tableau piles in the first move. For example, if your first column has a seven of clubs, and your third column has an eight of hearts, you can move the seven on top of the eight to create an empty column for a king. Then you can look for a black nine (either clubs or spades) to move the entire column you just created.

2. Draw from the stockpile to see more options

If you've checked what's on the table and you've run out of possible moves, check out the stockpile next. Drawing a useful card from the stockpile may open an opportunity to move cards to the tableau or the foundation piles, triggering a domino effect for further moves.

For example, if you have a black seven in the tableau, and draw a red six from the stockpile, you can use that to start building the column. You should then look for a five of clubs or spades that can be moved onto the red six to keep the game going. Carefully assess your tableau as you draw from your stockpile so that you don't miss any moves as you uncover new cards.

3. Play your aces and twos on the foundation piles immediately

Another Solitaire strategy that you can use anytime during the game is to play aces and twos right away. Playing these useful cards, as they appear, help you build up the foundation piles as the game progresses.

For example, if you have an ace or two in your tableau pile or stockpile, put them in your foundation piles accordingly. This not only frees up space and helps to uncover hidden cards but also helps begin the foundation piles, which get you closer to winning the game.

4. If you have options, move cards to free facedown cards

If you have multiple moves you could make at once, the best moves to make first involve moving cards that free up any facedown cards. Doing this immediately increases your possible plays by turning hidden cards to face-up ones.

For instance, if you have a four of hearts in your tableau that is covering a facedown card, you may have more options than you think. If it can be moved either to the foundation pile for hearts or somewhere on the tableau, both of those moves will uncover a facedown card. Deciding which move to make depends on which move allows you to uncover even more cards. So check your tableau for how subsequent moves could maximize the uncovering of more hidden cards.

5. Move cards from columns with lots of facedown cards

Revealing hidden cards help you progress through the game of Solitaire, so targeting large columns of facedown cards is a good Solitaire strategy.

Even when you have moves on your tableau that can reveal the first card in a large stack of facedown cards, you can also draw from your stockpile before making a move to see whether you gain more options to reveal cards in subsequent moves.

Building foundation piles too quickly or unevenly can make it difficult to work the tableau. While the ultimate goal is to get all cards of each suit in ordered piles and an empty tableau, you can't win Solitaire without using many of the cards in your tableau moves first. Getting too far ahead in one foundation pile as compared to the others can be a sign that you might have taken out a card you need to play.

Since columns are built by alternating colors, if you build your foundation piles unevenly, you may not have the cards you need to move other cards in the tableau. After all, you only have two cards of each color, so if you build up your foundation pile for diamonds up to the eight of diamonds, you have cut your chances in half for getting red cards from numbers two through eight. You might need those cards to make later moves and uncover hidden cards.

So keep an eye on your foundation piles to maintain them as evenly as possible. That means not moving cards from your tableau to the foundation piles until you can do so for the others. Although it's tempting to move them, you limit your chances of making later moves.

You might encounter a black four that is on a facedown card and needs to be placed on a red five. Already having moved the red five from your tableau to the foundation pile means you'd have to wait for the only other red five—the five of diamonds—to appear to move that black four, limiting your possible moves.

It may seem like it goes without saying, but the best moves to make in a game of Solitaire are ones where you move cards purposefully with future moves in mind. If you're just shuffling your cards around the tableau just because you can, you may miss out on a better move later in the game. Always move in ways that give you a chance to progress, particularly with revealing hidden cards.

For example, moving aces or twos to the foundation piles opens you up for subsequent moves because you open new places to play. Focusing on revealing facedown cards can also finetune your moves. The more hidden cards you reveal, the more cards you put into play. You reveal cards by either moving an entire column or the top card from a pile of hidden cards to another area on the tableau or to the foundation piles. The more facedown cards you reveal, the more moves you can make. You also free up new cards and get closer to winning.

8. Create empty columns only when you have a King available

For example, if you have an ace in the first pile on the tableau and move it to the foundation pile, you want to make sure you have a king ready to fill the empty space, either from the stockpile or another tableau column. Taking a card from a tableau pile would be ideal because you'll be able to reveal another hidden card after moving the king to a new column.

9. Pay attention to the cards' colors when stacking

Cards have to be stacked on the tableau in order by alternating color. In a deck of playing cards, you have only two cards of each color, red (hearts and diamonds) and black (clubs and spades). Once you move cards into your foundation piles, they're no longer in play, so make sure you don't move useful cards prematurely.

For instance, you might need a black four to move a red three to, but if you already put one of the black fours in the foundation pile, you've limited your possible moves and will have to find another way to move the three.

The two suits of each color can be used interchangeably, but sometimes it might be more advantageous to keep one suit over the other. For example, if your possible moves are between a four of clubs or a four of spades, you might opt to use whichever one is less useful for your foundation pile.

Though the cards of each suit can be used interchangeably with cards of the same color — black and red — suits ultimately do matter in the game of Solitaire. You can't win Solitaire without getting all cards of each suit stacked in the four foundation piles, ordered from ace to king.

Trying to arrange columns in your tableau so that the same-colored cards in each pile are of matching suits makes it easier to play Solitaire. If you have one column that has a red seven of hearts, and you add a black six of spades, and then you have the option of playing either the red five of hearts or the red five of diamonds, playing the five of hearts would be the best move as it matches up with your seven.

11. Use the undo button as needed

When you play Solitaire online at SolitaireBliss, it's very easy to instantly undo your moves if you make a mistake. Playing online can be an easier way to practice and familiarize yourself with the game than playing with actual playing cards — sometimes, you may not realize your mistake until you've made several moves, or you may not be able to pinpoint where you made a misstep. For example, playing online, you might use the undo button if you accidentally moved a card to the foundation pile when you needed that card to help you in the tableau piles.

Once you've mastered Classic Solitaire and want a new challenge, you can find many different versions of Solitaire to try, like Spider Solitaire and FreeCell. Try these Solitaire strategies the next time you play — you'll be a great Solitaire player in no time.