As A Single Player Game, We Wanted To Know The Suburbs With The Most Singles

As a site where our users come to play single player games, with Valentine's Day coming up, it got us thinking about the lists of big cities where the most single people live, or the lists ranking cities with the best dating scenes.

It’s not surprising that major metropolitans tend to attract more people. But single people don’t just live within the confines of major cities, there are plenty of singles out in the suburbs, who enjoy games like Solitaire! If you’re one of those singles, and you’re ready to mingle, and you’re not going to play games with people’s hearts, we’ve got exciting news for you. What follows is a report on the suburbs with the most singles!

We analyzed US Census Bureau data to find out which major suburbs have the highest percentage of single people, including people who have never been married, and those who are divorced or separated.

Suburbs with the Most Singles 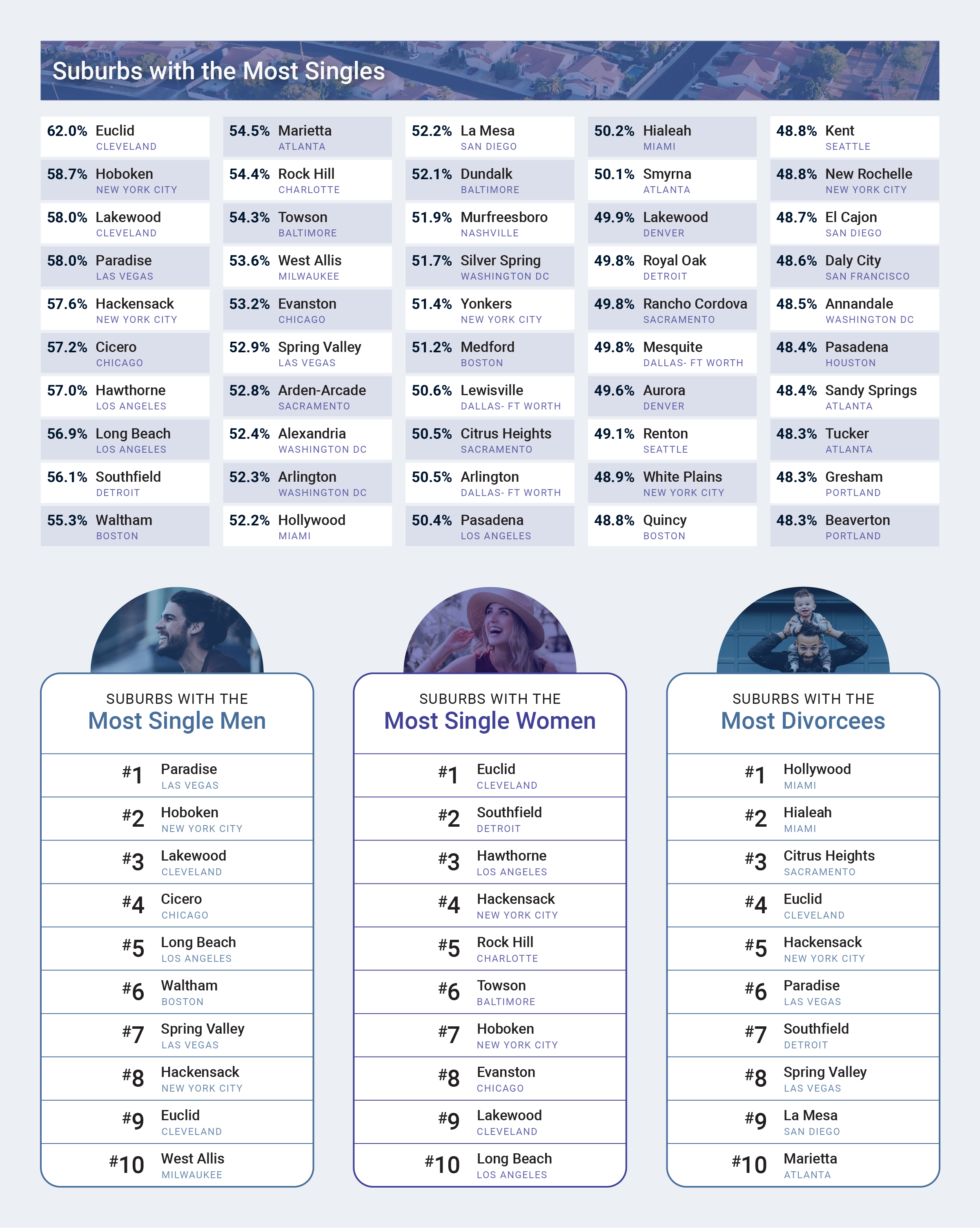 The number one suburb in America with the most single people? It may surprise you, but Euclid, Ohio takes the cake. Sixty-two percent of residents in this Cleveland suburb are reported as single, so if you’re looking to mingle with other singles it might be time for a trip to Euclid.

Following Euclid, the suburb with the second most singles is Hoboken, New Jersey. Located just outside of New York City, 58.7 percent of residents are reportedly single. Visiting the Big Apple? Perhaps staying in Hoboken may be the way to meet your relationship if you’re hoping to mingle with other singles.

Another Cleveland suburb makes the top five for singles in the suburbs. Over half (58 percent) of Lakewood, Ohio residents are reported to be single. So if Euclid isn’t the place you want to be, perhaps give Lakewood a try if you want to meet other singles!

Tied with Lakewood for the most singles is Paradise, Nevada, a suburb of Las Vegas. Fifty-eight percent of this Sin City suburb are reported to be single.

Rounding out the top five for most singles in a suburb is another area outside New York City; Hackensack, New Jersey. Again, over half (57.6 percent) of residents in Hackensack are single and (maybe) ready to mingle.

If you’re hoping to meet someone in the suburbs, try setting your dating app location to some other notable single suburbs such as Cicero, Illinois (suburb of Chicago), Long Beach, California (suburb of Los Angeles), Southfield, Michigan (suburb of Detroit), or Marietta, Georgia (suburb of Atlanta).

States with the Most Singles 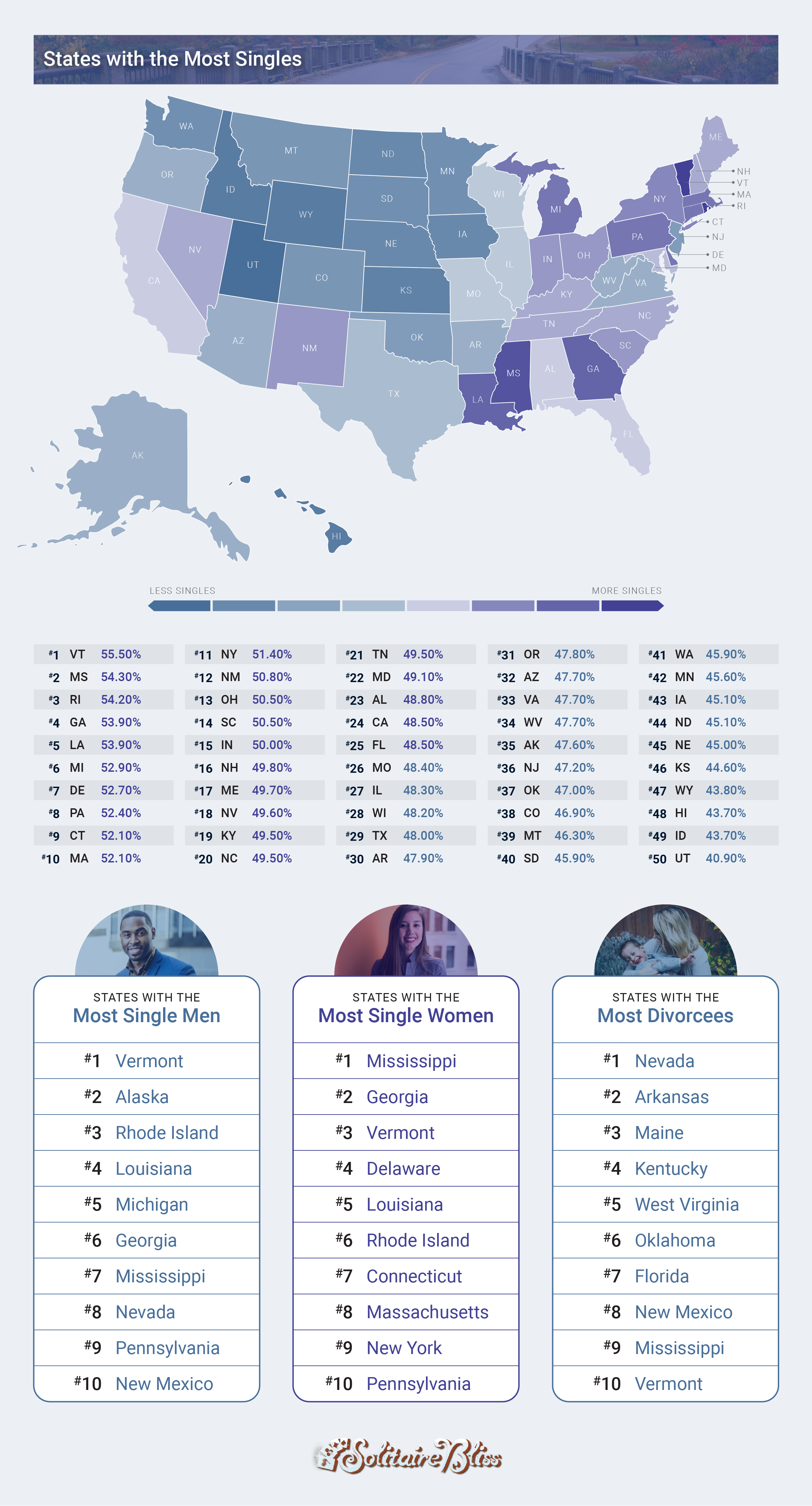 While it’s great knowing the major metropolitan suburbs with the most singles, maybe not everyone is looking to move that close to the city. We also analyzed Census Bureau data to find out which states have the most single people.

Major Cities with the Most Singles 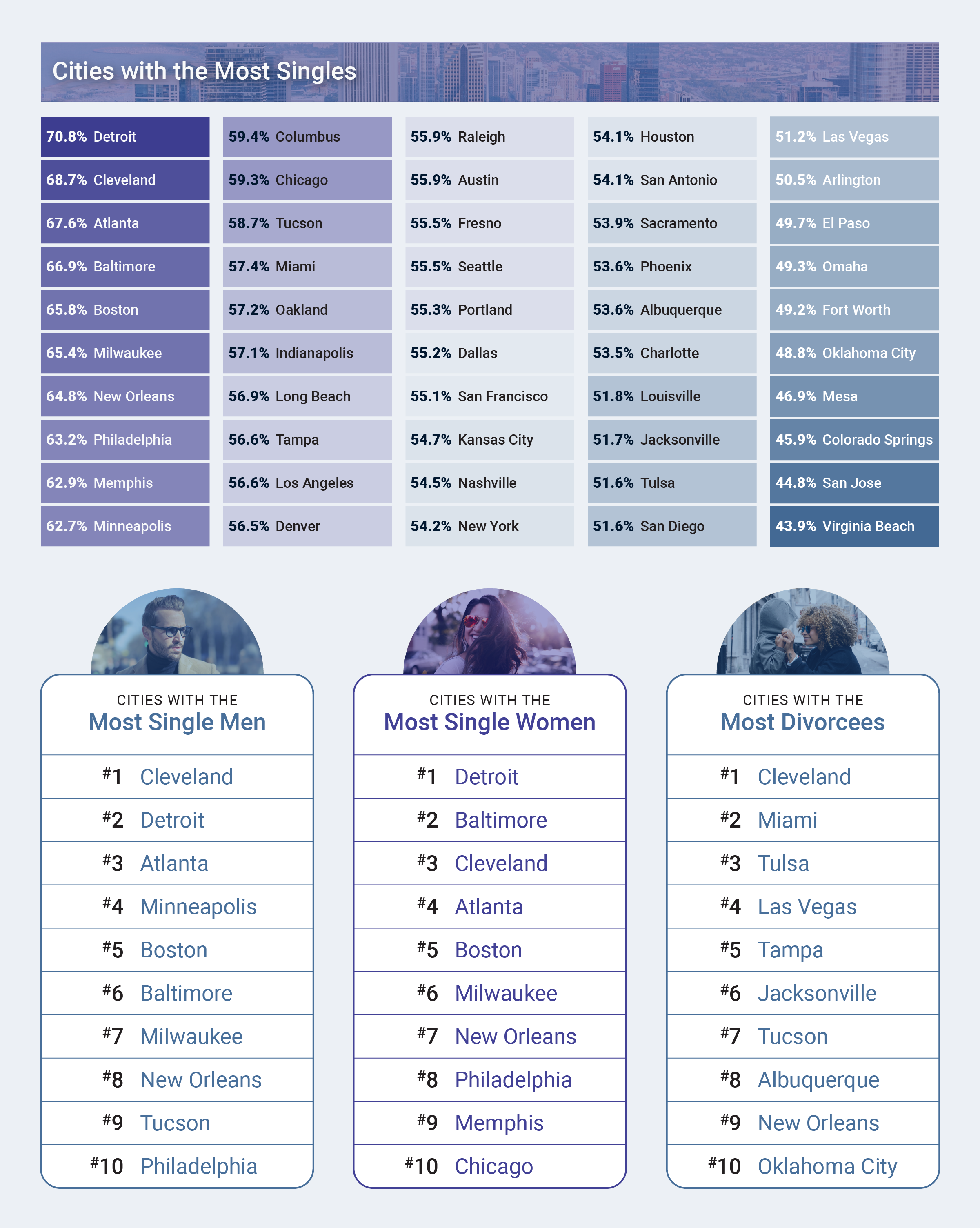 Following the Motor City is Cleveland, which makes sense considering two suburbs of this city are among the top five for the most single people. More than three in five of Cleveland’s residents are single. So if you’re ready to meet some other singles, perhaps a tour of Cleveland and its surrounding suburbs is the place to start.

Finishing out the top five cities with the most single people is Atlanta (67.6 percent), Baltimore (66.9 percent), and Boston (65.8 percent).

No matter where you live, it can be hard to meet other single people, especially as you get older. But hopefully, this study can help point you in the right direction if you’re looking to meet somebody or make a group of single friends!

In December 2021, we analyzed 2019 US Census Bureau data for more than 130 suburbs surrounding America’s 50 largest cities. We assessed the percentages of the population who are “never married,” “divorced,” and “separated,” all between the ages of 18 - 65 years old.

In addition to our analysis of suburbs, we assessed single percentages in all 50 states and the 50 largest cities in the US, by population.

When using this data and research, please attribute by linking to this study and citing Solitaire Bliss