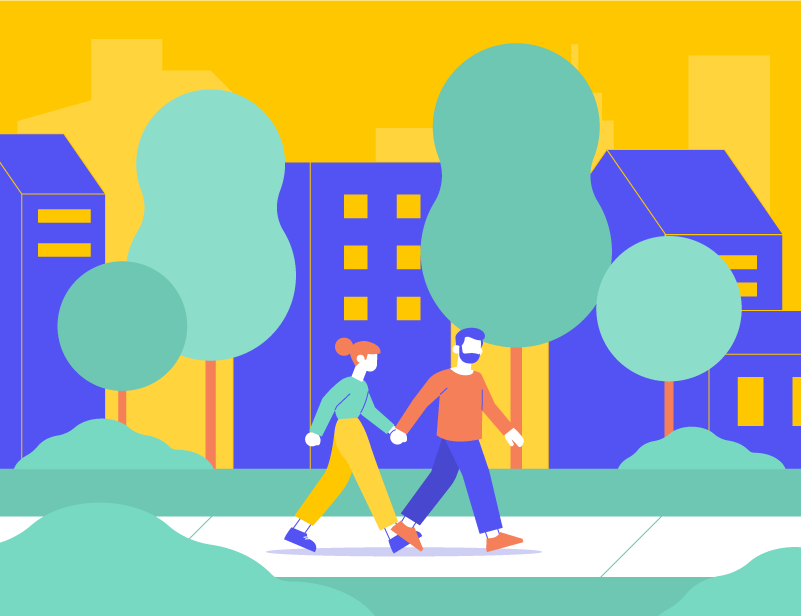 During the past two years, many Americans have been trying to slow down: they’re swapping cities for smaller towns, and picking up relaxing hobbies like gardening and Solitaire. Although we can’t all escape to the countryside for some peace and quiet, you can still find some solace in major metropolises.

To figure out which of the 50 biggest cities in the U.S. offers some respite from the hustle and bustle of modern life, we dug into data on everything from light pollution to noise levels to traffic accidents. To rate each city according to its level of “peace and quiet,” we created an index score that combines some key factors of a peaceful life.

The best major U.S. cities for peace and quiet

To create our peace-and-quiet scores, we analyzed three key factors for each city: residential construction spending, light and noise pollution and traffic accidents. We used these measures as proxies for crowded, loud cities that can make city life more stressful than blissful. The cities with the combined highest scores reflect the quietest, most peaceful cities while those with lower scores indicate more hectic and loud environments.

Virginia Beach ranked number-one on our peace-and-quiet scale with a score of 43.13 out of 50. Because it does have moderate residential construction spending, you might hear some hammering during the day, but its overall light and noise pollution and number of traffic accidents are lower than those in many other major U.S. cities.

You might think of New Orleans as synonymous with nightlife on Bourbon Street, but most of the town is more lowkey. It’s a walk-friendly community with quiet residential areas. The area scored a 39.71 out of 50 thanks to its relatively low residential construction spending and low light and noise pollution.

Oklahoma City offers another great option for those who want city-style amenities without the overwhelming hustle and bustle—at 39.10 out of 50, it ranked third on our scale. Although you might encounter a bit of construction, the light and noise pollution is minor, and a low number of traffic accidents suggest calmer drivers and open roads.

What makes a big city good for peace and quiet?

We broke down the factors that make larger cities good options for quiet and solitude, even those with urban settings.

Nothing ruins a restful morning like construction workers drilling one building over. We included residential construction spending in our index scoring as a marker of a city’s expansion—and all the people and noise that come with it.

The cities with the lowest spending are Hartford, Pittsburgh and Providence. On the other hand, Austin, Nashville and Raleigh are spending thousands per head on new residential buildings. These Southern cities are certainly fun, but they’re not the quiet towns they used to be. 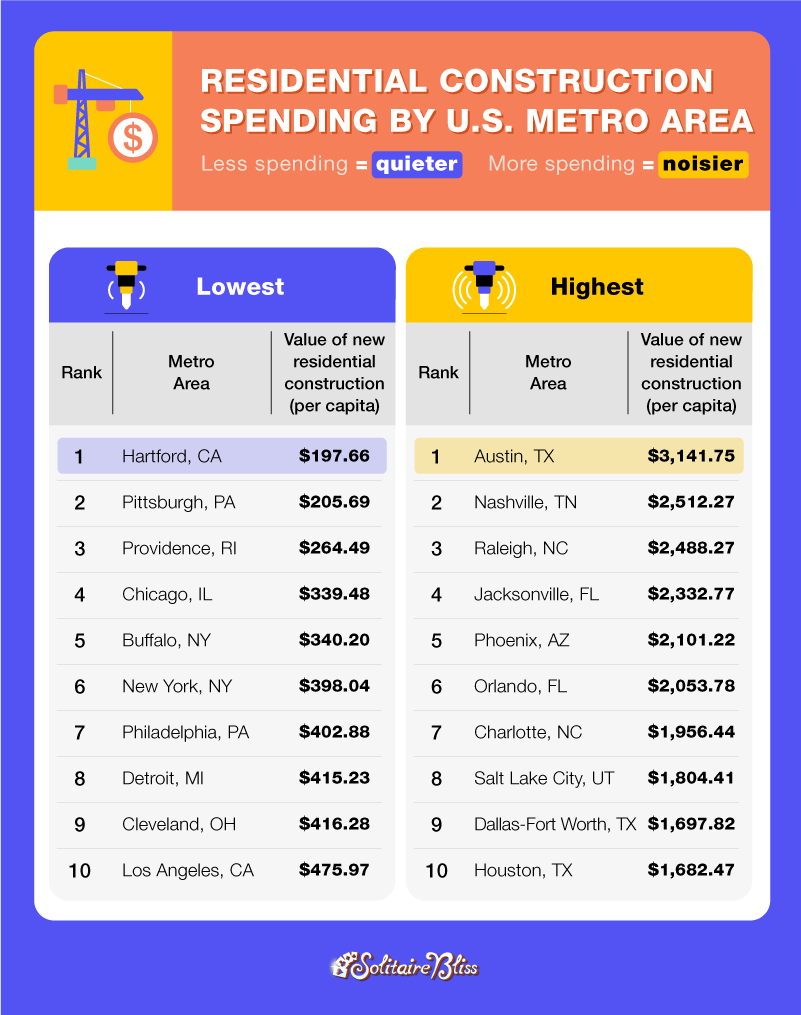 There’s a reason Las Vegas and New York are often referred to as cities that never sleep: 24-hour businesses, tons of tourists—it all makes for a loud, bright place, even in the middle of the night.

Cities with lower levels of light and noise pollution, like New Orleans, Virginia Beach and Jacksonville, are much more peaceful by comparison. 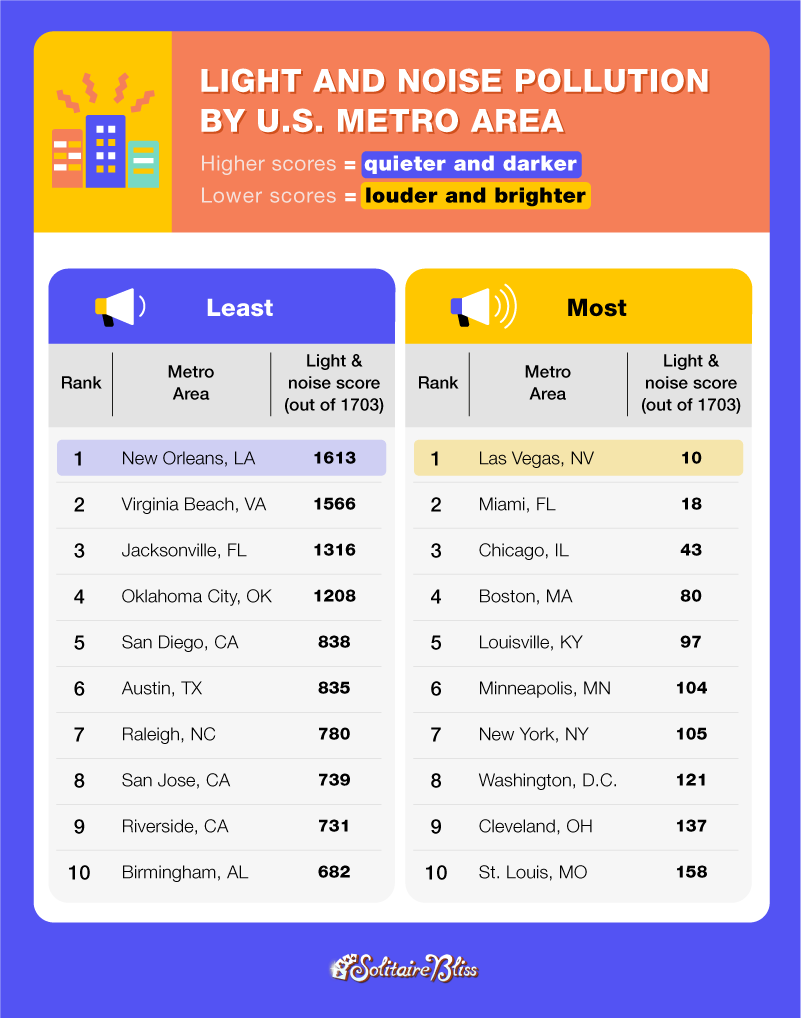 If there’s one thing that can make a city feel crowded and overwhelming, it’s tons of traffic and angry drivers. High rates of traffic accidents indicate congested streets and stressed residents, while fewer accidents is a sign of better traffic flow, more space and even more relaxed people.

Though Boston, San Jose and New York are definitely crowded cities, they have the fewest number of traffic accidents per capita. In each of these cities, expensive public transportation systems offer alternatives to stressful driving situations. 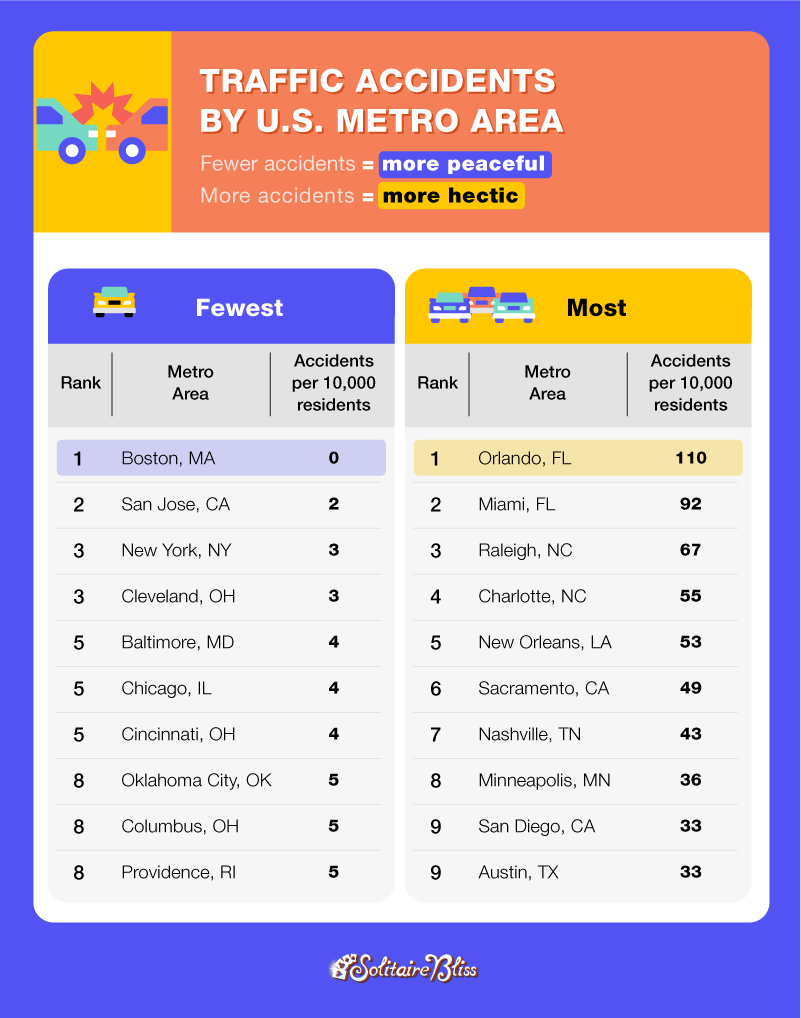 Methodology: To compare levels of “peace and quiet” in different U.S. cities, we created an index score from for each city based on three criteria:

Each factor was weighted equally. Cities were scored from 1 to 50; the higher the score, the more peaceful the city.