Most Popular Drinking Games by State in 2022

While we know you love playing our solitaire game, it’s now the season for pool parties, games with friends, and backyard barbecues, and it wouldn’t be complete without some alcohol-infused fun. We’re talking about drinking games.

Using Google search data, we combed through more than 3,100 phrases such as “yard pong” and “beer die table” to figure out the most popular drinking games across the nation. Some states are a little more creative than others when it comes to their favorite game, while others prefer some tried and true classics.

Overall, the top games in 19 states were all about beer (beer darts, beer die, etc.). Beer pong is the most popular game in 7 states including New York, Nevada, and Oregon. In addition to beer pong, another college classic, flip cup, was most popular in Arkansas, Delaware, and West Virginia. Some Midwest states (Illinois, Wisconsin, and Minnesota) would like to test their luck (and safety) by playing Beersbee.

Whether you call it Waterfall, Circle of Death, Ring of Fire or King’s Cup… chances are you’ve played some variation of the famous drinking game centering around cards and a drink. Half a dozen states including Tennessee, California, and Georgia are game for King's Cup. Out West, Hawaii and Washington love Portuguese Horseshoes (a game similar to bags).

We’re guessing Colorado, Massachusetts, and Pennsylvania are all big fans of the TV show New Girl. Their favorite drinking game is a made-up game from the sitcom called True American (and yes, you can actually play it)!

Really any game can be a drinking game if you so wish. Especially when hanging out in a backyard on a nice summer day, many people may choose to make popular yard games like Bocce ball and Cornhole (aka bags) into a game of drinking. Other popular games across the U.S. include dizzy bat, drunk Jenga, and Kan Jam. 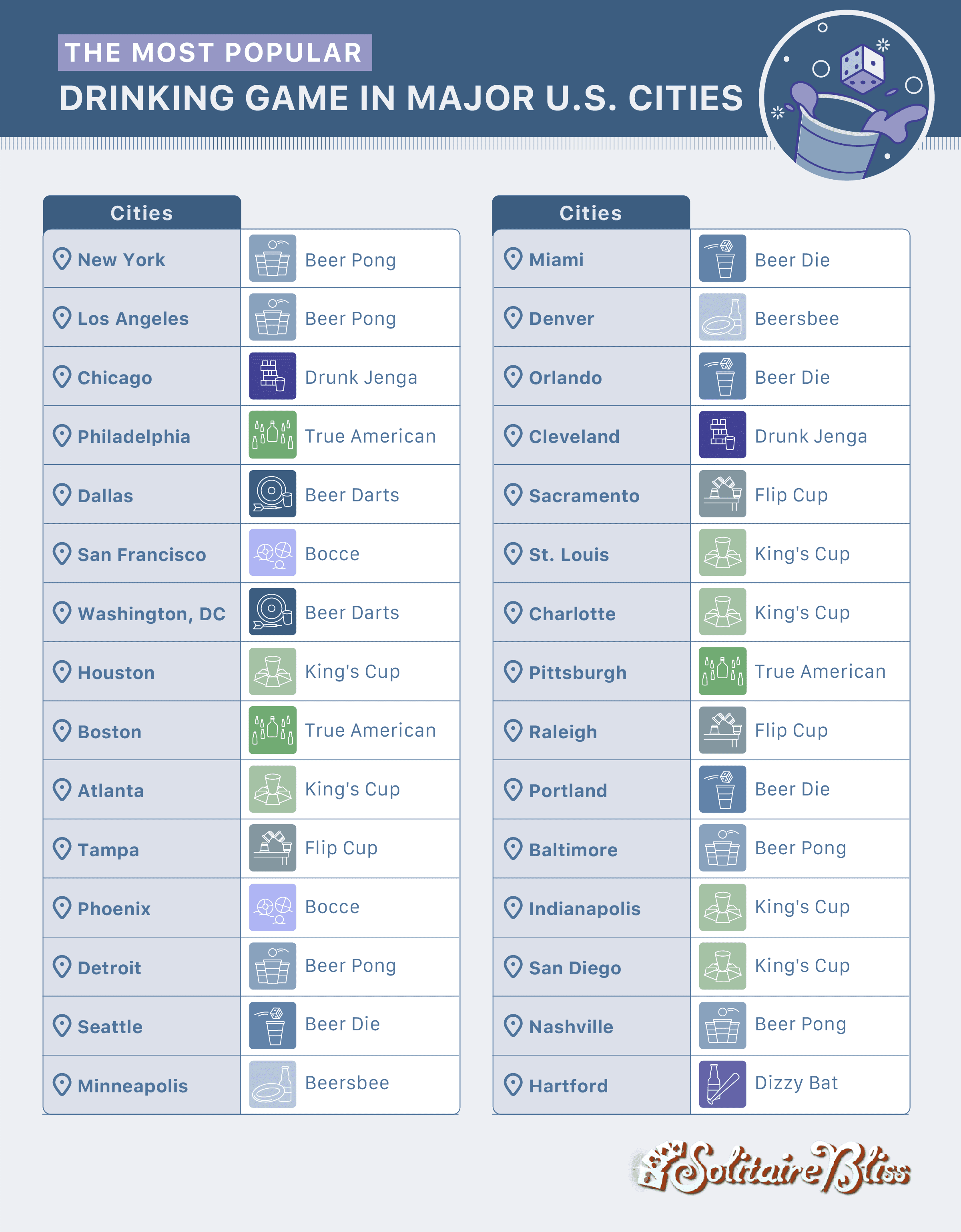 When it comes to the 30 biggest cities in the U.S., King’s Cup reigns supreme. Atlanta, Charlotte, Houston, Indianapolis, San Diego, and St. Louis are all fans of the card game (where cards like the King of hearts rule the game)! Of course, if you play it in Atlanta, the game may not be the same in Charlotte. The rules often differ depending on who the host is, so you better try to pay attention so you don’t end up under the table.

Meanwhile, Chicago and Cleveland are fans of the oldie-but-goodie drunk Jenga. San Francisco and Phoenix would like people to play a nice tipsy game of Bocce ball.

Only two cities went solo with their favorite drinking games. Hartford was the only one to prefer dizzy bat, while beer darts was the most popular game in Washington D.C. 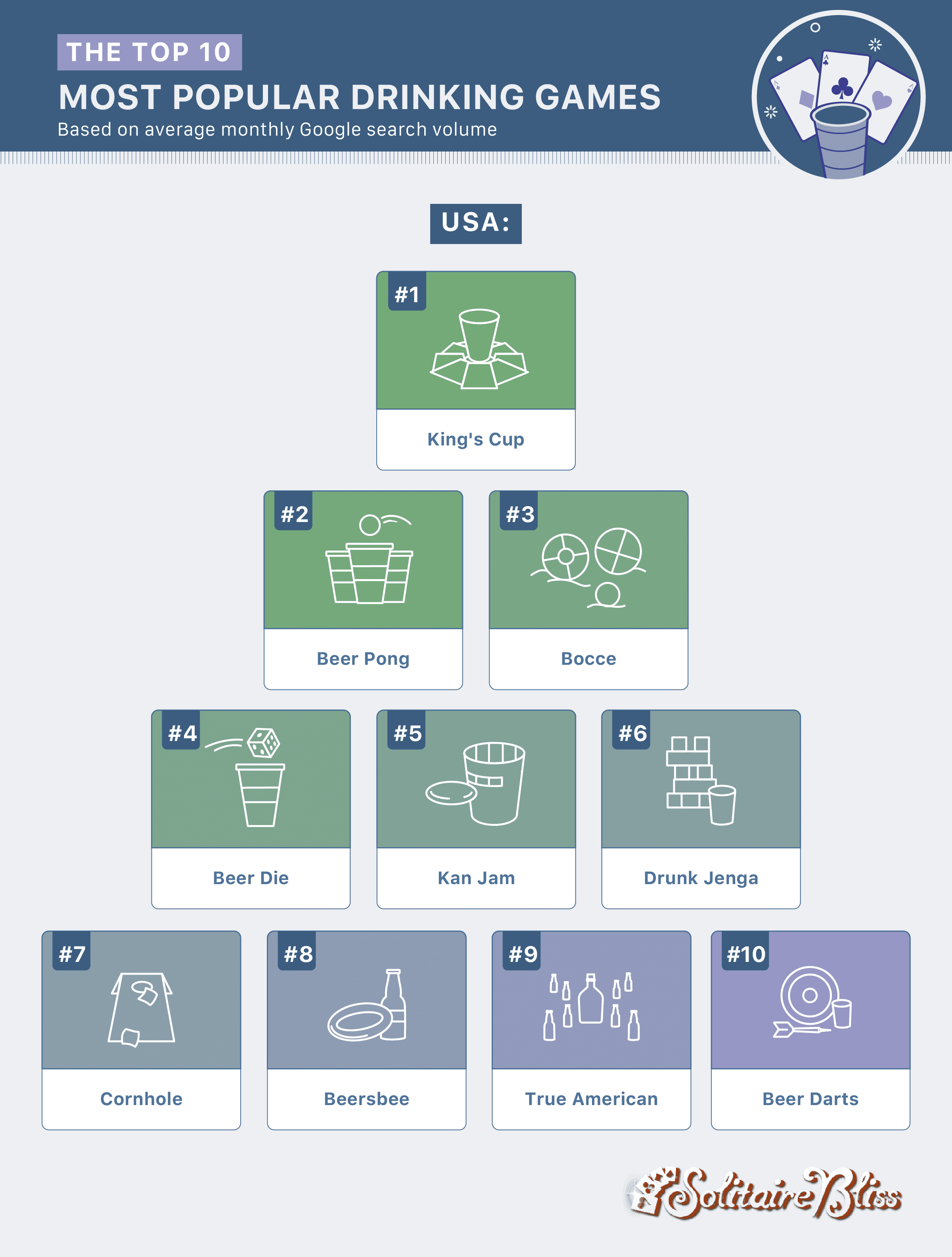 It might help that there are so many variations and names for the game, as King’s Cup reigns supreme as the most popular drinking game across the U.S. Other top drinking games include beer pong, bocce, beer die, and Kan Jam. Some honorable mentions include Never Have I Ever, power hour, and truth or drink.

So, whether you prefer classic games like solitaire or prefer to spice up the competition with some liquid courage, there's no shortage of options for your next summer barbeque. Best of luck, and please remember to drink responsibly.

When using this data and research, please attribute by linking to this study and citing https://www.solitairebliss.com/